Due to the recent rapid increase in industrial and domestic energy consumption and environmental pollution, researchers around the world are being required to develop renewable and sustainable energy storage and conversion technologies. Recently, sustainable energy conversion devices, including proton exchange membrane fuel cell (PEMFC), have attracted considerable attention in an electrical vehicle (EV), industrial plant, unmanned aerial vehicles (UAVS), emergency backup power generation, and portable device applications due to their high efficiency, environmental friendliness, simplicity, quick startup, and low cost. Various investigations have been conducted in recent decades to optimize and develop PEMFC applications, along with the study of proton exchange membranes (PEMS) being particularly important [1-4]. At present, Nafion is used as a benchmark proton exchange membrane in fuel cell applications due to its chemical, thermal and mechanical stabilities along with high proton conductivity.
However, the Nafion and fluorinated polymers have high-cost, low conductivity, and low durability at high temperatures [5]. In recent decades, intensive efforts have been made to develop low-cost polymer-based membranes to replace Nafion in the fuel cell field. At present, organic-inorganic polymer nanocomposites have attracted considerable attention due to their improved physical, mechanical, thermal, and proton conductivity properties. These non-fluorinated membranes of poly(ether sulfone), poly(benzimidazole), poly(ether ether ketone), and poly(imide) are effectively used in PEM fuel cell application [6-9].
Since inorganic nanofillers provide high thermal and mechanical stability and pristine polymers provide flexibility and multi-functional reactivity, the combination of inorganic nanoparticles and polymer membranes provide improved aforementioned properties and it could be used for high temperature (HT) PEMFCs [10-15].
Poly(benzimidazole) (PBI) is an aromatic heterocyclic polymer, which contains both proton acceptor (-N=) and proton donor (-NH-) hydrogen bonding sites in the polymer backbone that is an excellent candidate for use in HT-PEMFCs due to their excellent thermal and mechanical stability. Generally, PBI is a better electronic and ionic insulator, while doping with acid shows excellent proton conductivity properties. PBI doping with phosphoric acid (PA) is an interesting technique for HT-PEMFC applications due to its high boiling point temperature, non-volatile property, high thermal stability, and high proton conductivity [16,17]. On the other hand, PA molecules with amphoteric nature and high dielectric constant at low humidity are suitable properties for substituting H2O molecules in HT-PEMFC, which can create hydrophilic channels for cation exchange in the PA doped PBI membranes.
Perovskite is a stable type of oxide with the general formula ABO3 can be a suitable choice for this purpose. A (cation A is 12-coordinated by oxygen, has a large ionic radius, and has a size similar to that of an oxygen ion) and B (cation B is 6-coordinated by oxygen and has a small ionic radius located in the octahedral holes between the closed pack AO layers) are suitable cations for the perovskite structure in the ABO3 formula of perovskite [18].
Perovskite structures obtained from transition elements such as Ba, Ra, and Srcan be used as hygroscopic materials to improve the humidity sensing performance [19]. The proton conduction mechanism of the materials when interacting with water is well known as cation conductors [20]. Studies on perovskite-type ABO3 materials have improved in recent years owing to their high proton conductivity in a humid atmosphere at high temperatures (1000oC). The perovskite structures have high thermal, chemical, and mechanical stabilities. Perovskite-based SrTiO3 displays a cubic structure with a lattice parameter of 3.91 Å and space group Pm3m [21]. In the regular octahedral coordination of the SrTiO3 lattice, A-site occupies strontium cation, B-site occupies titanium, and oxide anion occupies periphery. It provides excellent proton transfer under certain atmospheric and doping conditions. Therefore, studies to improve the properties of cross-linked, composite or/and hybrid polymers are being conducted [22,23]. Among several types of PA-doped perovskites, such as PBI/Fe2TiO5 [24], PBI/SrCeO3 [25], and PBI/BaZrO3 [26], have been considered as potential materials to enhance the proton conductivity of composite membranes.
Based on the studies mentioned above, we designed PBI/SrTiO3 nanocomposite membranes with different weight percentages of SrTiO3 (2wt%, 4wt%, 6wt%, 8wt%, and 10wt%) and fabricated them by the solution casting method. In addition, through acid uptake, thermal stability, and proton conductivity tests of the fabricated polymer nanocomposite membranes, particularly the optimized PBI/SrTiO3(8wt%) nanocomposite membrane, was evaluated to have improved thermal stability, proton conductivity, and surface roughness compared to other nanocomposites. We consider that the PBI/SrTiO3 perovskite-based polymer nanocomposite membranes could be potential candidates for HT-PEMFC applications.

2.2 Preparation of PBI
The PBI was synthesized from DAB (4.32 g, 0.012 mmol), IPA (1.99 g, 0.012 mmol) in 150 mL of PPA as a condensing agent by the synthesis method of Scheme 1. That is, both DAB and IPA were added into a 300 mL two-necked flask equipped with a mechanical stirrer under a nitrogen (N2) atmosphere. The mixture was then stirred at 220oC after 24 h, then an appropriate amount of DI water was added and neutralized with the aid of NaHCO3. The obtained product was then washed with methanol and dried overnight in a vacuum oven at 120oC [27,28]. The molecular weight (MW) of synthesized PBI was 75 kDa, which was calculated by Ubbelohde viscometric studies.

2.3 Synthesis of SrTiO3
The synthesis of SrTiO3 was carried out using a 1:1 stoichiometric ratio of metal cations of SrNO3 and titanium (IV) isopropoxide. The metal cation precursors in the above ratio were separately dissolved in DI water to form a transparent homogeneous solution under constant stirring for 4 h. A similar mole % of KOH solution was then added to the metal cation solution to control the pH level. The resulting product was then heated in a tubular furnace at 1000oC in a N2 atmosphere for 6 h. The obtained samples were collected and various characterization techniques were applied.

Scheme 1. Preparation of the PBI

2.4 Preparation of PBI/SrTiO3–X composite membranes
As shown in Scheme 2, PBI/SrTiO3-X nanocomposite membranes were prepared by the solution casting method. First, a proper amount of prepared PBI was dissolved in DMAc with stirring at 100~120oC. Thereafter, different weight percentages of SrTiO3 (2wt%, 4wt%, 6wt%, 8wt%, and 10wt%) nanoparticles were added into the above PBI polymer solution, and the mixture was stirred at room temperature for 1 day. The obtained brown solution was poured into a Petri dish and kept at 160oC in an oven for 1 day. The resulting membranes were removed from the Petri dish and immersed in the PA solution. The obtained PBI/SrTiO3-X (X is 2, 4, 6, 8, 10wt%) polymer composite membranes were stored in vacuum desiccators to avoid moisture absorptions. The thickness of the prepared polymer composites was measured at various positions using a digital screw gauge and thickness was about 50 µm.

2.5 Characterizations
Proton nuclear magnetic resonance (1H NMR, JNM-ECA600-600 MHz) was used to ensure the chemical structure of the polymers using deuterated DMSO-d6 as a solvent. The morphology and surface roughness of the pristine PBI and PBI/SrTiO3 composite membranes were analyzed using an atomic force microscope (AFM, multimode 8, Bruker Corporation) in tapping mode. Thermogravimetric analysis (TGA) was performed using SDT Q600 systems. The TGA measurement was measured by heating from 25 to 1000oC under an N2 atmosphere at a heating rate of 10oC/min.

2.6 Measurements
A piece of the composite membrane having a size of 1×1 cm was immersed in an 85% PA concentration solution for 1 day. The PA doping level of the membranes was defined as follows. The number of the PBI repeating units contained in 1 mole of PA is as shown in equation (1).

Where wo and w1 are the weights of the dry membrane and doped membrane, respectively. Values 98 and 308 are the molecular weights of the PA and PBI repeat units, respectively. Leaching test is a method of measuring the residual amount of PA after washing the PA-doped PBI/SrTiO3 nanocomposite membrane with hot water (the membrane is immersed in hot DI water at 90oC for 2 h). It is considered as one of the major decomposition factors of the PBI/SrTiO3 composite membranes in fuel cells. AC impedance measurements were performed on polymer electrolytes using a computer-controlled μ-Auto lab Potentiostat/Galvanostat in the frequency range of 0.1 Hz to 10 MHz with a voltage amplitude of 50 mV [29]. Measurements were carried out in the potentiostat mode.

Where σ is the ionic conductivity value (S/cm), L is the thickness of the membrane film, R is the bulk resistance of the composite membrane film, and A (1 cm × 1 cm) is the area of the sample. 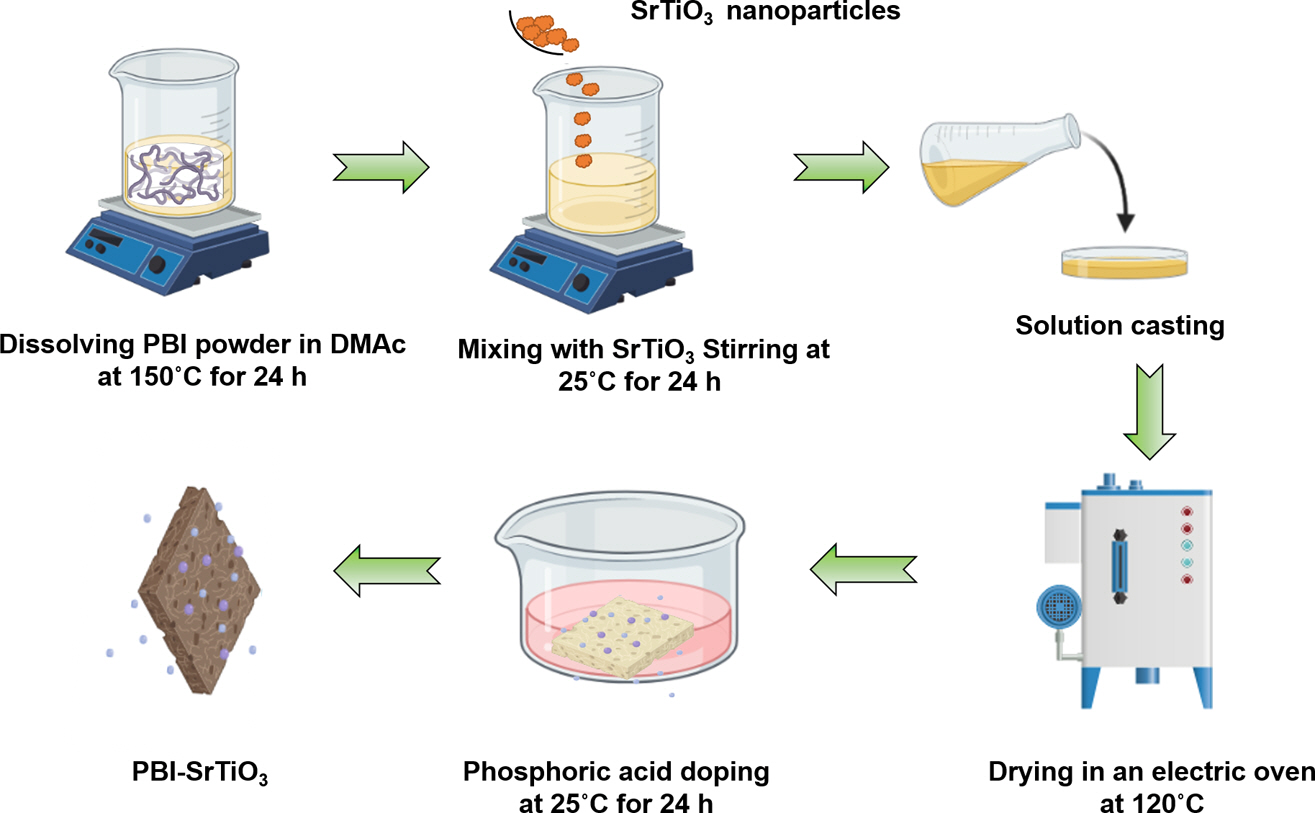 3.1 NMR analysis of pure PBI
1H NMR spectroscopy is used as a scrutinizing technique to confirm the presence of the polymer structure. The 1H NMR spectrum of PBI with DMSO-d6 solvent is shown in Fig. 1. The main peak 13.25 ppm is the amine protons of the benzimidazole moiety and peaks 7.59 to 9.15 ppm represent the aromatic groups of the polymer [28]. The results suggest that the carboxyl and amine groups are involved in the condensation process and copolymerization of IPA and DAB to PBI.

The third major weight loss that occurs at above 600oC is due to the main polymer degradation [35]. Since the incorporation of SrTiO3 nanoparticles into the PBI polymer matrix increases the thermal stability of composite membrane, the obtained results explain that TGA shows high thermal properties of the PBI/SrTiO3-8 nanocomposite membrane for HT-PEMFC.

3.5 AC impedance
The Nyquist plots of PA doped PBI with various concentrations of SrTiO3 at 160oC are shown in Fig. 6. From Fig. 6, x-axis Z’ is denoted as real part and the imaginary part is –Z’’ the bulk resistance R can be taken from intercept on the x-axis. Javan bakht et al. reported the proton conductivity of pristine PA-PBI was measured AC impedance method and the proton conductivity value of 5.12 × 10-3 S/cm at 160oC [25]. Proton conductivities were calculated from the bulk resistance of the composite membranes of Fig. 6 using equation (2). The maximum proton conductivity of the nanocomposite membrane was obtained at 7.95 × 10-2 S/cm at 160oC for the PBI/SrTiO3-8 sample. It involves protons exchange between phosphoric acid, H2PO4- or HPO42- and PBI. Additionally, strong acids can form polymeric complexes due to hydrogen bonding interactions or acid-base interactions between the imidazole group of PBI and the acid molecules from the oxygen to the nearest neighbor ion [36,37]. Moreover, the sites corresponding to the ABO3 perovskite structure correspond to A-cation at the vertices of the unit cell, B-site cation in the center, and oxygen ion at the face of the cubic structure [38,39]. In particular, the cubic SrTiO3 perovskite structure exhibits proton conductivity at high temperatures [40]. The proton conductivity of the nanocomposite increases with an increasing amount of SrTiO3 nanofiller at 160oC. This enhancement of the proton conductivity of the PBI/SrTiO3-8 sample is attributed to the hygroscopic properties of SrTiO3 particles in the membrane. However, the conductivity value of the PBI/SrTiO3-10 polymer composite membrane is decreased because some of the amino groups in PBI chains are blocked by SrTiO3, which reduces the binding ability of the PBI chains to the PA groups.